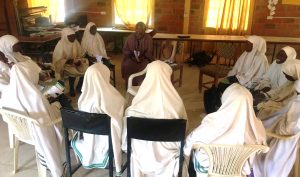 Becoming a peer educator on SFH’s MTV SHUGA PROJECT, made me realise that most problems adolescent’s in my community face are a result of; lack of good communication between them and their parents, lack of courage to discuss problems with their parents, and harsh treatment from their parents when sensitive issues are discussed. I discovered that a number of my peers are from broken homes and it affects them emotionally. This is not outrightly obvious but with keen observation, I can trace the dotted lines.

In all my sessions, I encourage my peers to tell me a few of the things they would like to change in their community. The major responses were, “I want to make the world safe for girls”, “I want to stop parents from making their children hawk”, “I want parents to be more gentle with their kids”, “I wish parents would give their children a chance to be educated”, “I wish I can educate parents on how they could be closer to their children”. Most of these responses were from girls who hawk and do not have the opportunity to be in school. With time, I realised that it was their inner voice speaking.

Another time, I asked the girls to discuss the issues that bothered them most. Some of their responses were “My dad does not take care of us”, “our dad has left us”, “I want to tell my mother something important but she will not listen to me”, “my parents don’t care about my well-being and education”, “I want to run away, far from home”. These responses also made me realise that a number of my peers felt neglected and needed their parent’s care and concern.

The most striking story for me was *Nusaiba’s (name changed for protection) story. Nusaiba is a pleasant girl who always appeared to be happy but contrary to her demeanor, she was going through hard times. She shared with us that she had been sexually abused by 3 men, 2 of whom were her uncles living in the same house with her and her parents. She could not tell her mother what she was going through because she believed her mother would misunderstand her. I eventually had the opportunity to meet her mother and I realized that she hardly had time to cater to her daughter’s emotional needs. She complained to me about Nusaiba’s lateness to school, lack of concentration in class and excessive playfulness. She did not recognise that her daughter’s behavior could be a result of underlying problems such as depression. However, I encouraged Nusaiba to open up to her mother about her experiences and she did. She and her mother were able to have a conversation and her mother promised to pay more attention to her needs.

Before the end of my sessions in 2019, I ensured all my peers learned the importance of effective communication, especially with their parents and caregivers. By the end of the year, one of the peers informed me that she spoke to her dad about her desire to continue school. Her father explained his financial constraints to her but promised he would find a free school for her by January 2020, to complete her education.

I have come to realise that these sessions are not only beneficial to my peers. I have learned a lot from them too. I now have a deeper understanding of how vital communication is, particularly among families. I call on all parents/guardians to encourage their children/wards to freely discuss their problems with them. They should also avail themselves to listen attentively and take the necessary actions.