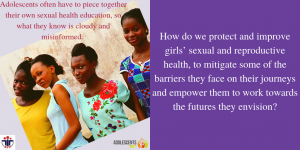 Teenage pregnancy is a major health concern because of its association with higher morbidity and mortality for both the mother and the child. Additional childbearing during the teenage years frequently has adverse social consequences, particularly regarding educational attainment, because women who become mothers in their teens are more likely to curtail their education1. The issue of adolescent fertility is important for both health and social reasons. Children born to very young mothers are at increased risk of sickness and death. Teenage mothers are more likely to experience adverse pregnancy outcomes and to be constrained in their ability to pursue educational opportunities than young women who delay childbearing2 – NDHS 2018. Between 2013 and 2018, the overall percentage of adolescents age 15 – 19 who had begun childbearing dropped from 23 percent in 2013 (17 percent have had a child and 5 percent are pregnant with their first child) to 19% in 2018 (14% had had a live birth and 4% were pregnant). A larger proportion of teenagers in rural areas than in urban areas have begun childbearing – 32 percent versus 10 percent in 2013 and 27% versus 8% in 2018.

In 2016, Adolescents 360 (A360) project Nigeria carried out a qualitative research around adolescent sexual reproductive health in Lagos and Kaduna states. The research findings indicated that adolescents in Nigeria have a clear vision for their future. It also revealed that they were clear on what they wanted and what they wanted to achieve in life. However, the hopes, dreams and trajectory of girls in Northern Nigeria is nuanced from that of girls from the South.

The ideal trajectory for an adolescent girl in the north includes finishing secondary school, getting married, having a family, and then continuing their education. In reality, early marriage and childbearing is common, often due to parental concern with morality and marital values. Many parents believe early marriage protects and upholds moral standards, thus protects the family image. In the south, adolescent girls strive to finish secondary school, learn a trade or attend higher education, gain financial independence, and get married and have children. In reality, few jobs, high poverty, and negative social influences mean adolescent girls have few opportunities after finishing secondary school and often have unplanned pregnancies.

Both southern and northern girls are faced with economic, social, and contextual factors which affect the realities they face in life and often stand in the way of achieving their dreams. Getting money to meet their personal and their parents’ needs is a major driver of sexual activities amongst adolescent girls. Some parents are financially dependent on their adolescents. This drives adolescents to meet those needs

Girls who get pregnant often resort to unsafe abortions because of the shame of pregnancy outside marriage. Many girls undergo abortion to protect her and her family’s reputation and complete school. Unsafe

abortion is a common practice among adolescent girls, even though girls fear abortion, once they get pregnant, they frequently abort. Some girls use traditional herbs for abortion and lose their lives in the process. Flagyl and Lipton, or potash and neem and salt, etc are used for abortion. Girls value being healthy, but don’t generally consider their sexual health and parents, community members and health care providers are concerned about health risks adolescents face from abortion.

How do we protect and improve girls’ sexual and reproductive health, to mitigate some of the barriers they face on their journeys and empower them to work towards the futures they envision? The goal of Adolescent 360 project is to improve the sexual reproductive health outcomes of adolescent girls below 20 years. These insights revealed the barriers adolescents face in life and in accessing Sexual Reproductive Health Information and Services. Some of these barriers are intrinsic while other are external. Three of these barriers ranked highest in the life of the adolescent girls.

The major barrier to adolescents’ use of modern methods to protect themselves, are their significant others. Adults want young people to learn about sex education and believe family members and teachers are appropriate sources for SRH education. They believe that sex education is important and should be led by parents and schools. In reality, there is limited or unclear discussion of SRH issues among parents and adolescents, Parents are hesitant to teach anything beyond abstinence and believe teaching adolescents about contraception encourages promiscuity. Thus, adolescents have to piece together their own sexual health education, so what they know is cloudy and misinformed. Married girls who want to use contraception have to rely on decision makers in their lives, who may or may not support them due to religious barriers or lack of knowledge. Thus, lack of spousal support (often due to lack of knowledge on contraceptive options) may hinder contraceptive use, yet some women secretly use contraception.

Secondly, adolescents lack or have incomplete information on how they can protect themselves against unplanned pregnancy. They also have misconceptions about modern contraceptives (e.g. the use of contraception leads to infertility and promiscuity) They feel it will damage their fertility and make them seem promiscuous. Girls fear the stigma of being seen as promiscuous, so they seek privacy for their sexual healthcare and contraceptive needs, but don’t trust that providers will keep their visit private and confidential. Thus, traditional contraceptive methods were seen to be more acceptable and popular than modern methods for adolescents. Unmarried adolescents face barriers to accessing modern contraception because they believe contraception is only for married people, so conclude that providers only serve married people. They know little about contraceptive methods beyond condoms, they sometimes resort to condoms and unorthodox/ traditional methods to prevent pregnancy.

Finally, healthcare providers’ personal beliefs, coupled with limited knowledge is another barrier adolescents face in accessing sexual reproductive health services including contraceptives. Doctors and nurses want to help adolescents, but their morals and limited training (AYFHS) get in the way of providing services to unmarried girls unless an adolescent is accompanied by a parent. Healthcare is often reactive: girls visit clinics when they have problem, and providers only feel comfortable serving girls when they have already made a mistake.