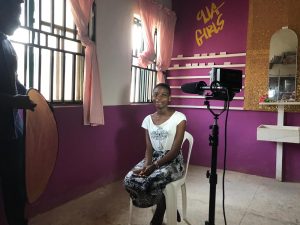 Growing up as a girl in Nigeria is exciting and comes with a lot of responsibilities. Our cloths – the designs, colours and patterns are spectacular. Our shoes – the high heels! the hair styles! – it’s all so exciting! The way a girl is brought up is so different from the way boys are trained. In the past, people say a girl will end up in the kitchen, they tell you – you’ll still end up being a mother… so a girl may have to wake up by 5 am to sweep, cook, clean up and do house chores and take care of the family. Girls have a lot of rules to abide with – indeed being a girl comes with responsibilities.

I am Beth and I’m 15 years old. Ten years from now, I would have finished school and served my country (NYSC). I dream of becoming a great journalist that will be known around the world – a journalist that speaks and writes stuff to make people know what is going on and keep the government in check. I want to stop all forms of injustice, such that everyone is treated equally because we all have the same rights. I realized I wanted to become a journalist when crime became very rampant in my community. There was an incidence – a girl had been missing for about 15 days and people did not know her where about, she was later found dead. It was published but the story was edited and hid some truths. I realized that to be able to ensure the public know the whole truth about what is going on and fight for their right, I must have to sacrifice everything and do everything possible to make sure the dream of being a journalist comes true.

I have often thought about possible obstacles to my dreams and how to avoid or overcome them – such as bad friends or peers, funds, unhealthy relationships, unplanned pregnancy, etcetera. But I never really thought about or knew about contraceptives as a way out for me or other young people.Growing up, I had heard older people say, choosing to use contraceptives, means the person wants to be promiscuous – that means she wants to sleep around and not get pregnant. I also heard using contraceptives is for married people only, others even said using contraceptives while married means the lady does not want to have children for her husband, so she can walk out of the marriage anytime. Some girls think it’s a means of doing anything they like. While in school, I was taught – about Family planning. However, the methods were not taught in depth, we were just told their names and uses, but the class was concluded with abstinence being the best method – even for the married.

A friend and I attended a program, where we heard about life mapping, goal setting and contraceptives. We learnt what contraceptives are, their functions, how they are used, as well as the side effects. The surprising thing was the way the health providers talked about contraceptives, when talking, they did not behave like it was wrong for young people to seek information about contraception. They did not look at us with condemnation. Going for contraception does not mean you’re promiscuous. We were informed contraception is not meant for only married people because some young girls may have the need to protect themselves.

When young girls get pregnant, they often drop out of school. They wait at home to have the baby, nurse and wean the child, this may take about 3 years. Before she goes back to school to achieve her dreams, her peers would have moved ahead. She is made to start from the beginning – just like you are starting afresh. To complicate matters, they may have no one who will take care of them during the pregnancy, neighbors and acquaintances make jest of them, the boy responsible for the pregnancy are often still dependent or may even deny the pregnancy. How will the girl survive? I don’t see abortion as an option, unsafe abortion is a chance of 50:50 – either you live or die during the process.Right now, I am not sexually active, but I can still make use of contraceptives because there’re cases where rape can happen. When I want to use contraceptives – I plan to make use the pills because I don’t like injections – I don’t like to feel pain, but with pills I can always keep to time and make use of the pills everyday just to make sure I am safe no matter what. I believe my life is mine to make, anything I decide to do – it’s all about me.

The decisions I take – good or bad falls back on me. My body is mine and no one can take – its only when I allow another person to have access to my body that is when the person can take it, but if I refuse, the person has no choice but to respect my wishes. My heart may break but I won’t fake, so even when I choose to give my heart to someone, and he breaks it and goes away, it’s just like “Soja go Soja come; water will keep flowing, nothing will stop water from flowing”, if he goes, I won’t fake that my heart is broken because I know someone else will take his place. I am now awake to things I did not know before and empowered to make informed decision and choices.