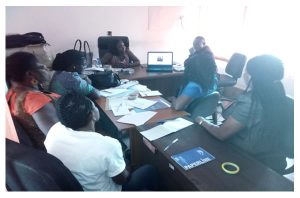 The Calabar Territory team after a successful advocacy visit to the Police Force in the state through the Police Action Committee on AIDS (PACA) agreed to collaborate with SFH in implementing the SHiPS for MARPs project in strengthening PACA with the implementation of the project amongst female police officers in the state. The collaboration aims at creating demand for cervical cancer and other MARP friendly related services amongst the police force considering their vulnerability as MARPS.

During the training which lasted for three days at SFH Calabar premises, the state team lead gave an overview of the SHiPS for MARPS project, while the trainees were drilled, coached and mentored on BCC, STI, Cervical Cancer and strategies of implementing MPPI. They were also tutored on the M&E tools used for reporting and were provided with some Edu -entertainment materials and IEC materials to facilitate their work in the field. The training also featured some practical session demonstrations on the usage of the manual.

At the end of the exercise, Inspector Kingsley of PACA representing the Police Medical director called on the trainees to maximise the opportunity by acquiring in-depth knowledge and skills on managing HIV/AIDS and Cervical cancer and subsequently, reach out to their colleagues with HIV/AIDS and Cervical cancer awareness and access to services provided by the project.

The trainees were highly impressed with the quality and level of training. They expressed their joy for being selected by the Police force for this experience. The training ended with a working tour of the OSS.

The goal of the training was to build Peer Educators’ (PEs) skills on the effective use of the PEP Model as an HIV Community-level communication Tool.