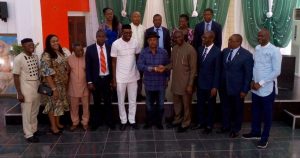 Governor Willie Obiano says despite its dwindling fortunes, his government will continue to support development partners and meet its counterpart responsibilities fortheir intervention programmes in the state.

Governor Obiano stated this when he received a delegation from the Society for Family Health, who paid him a courtesy visit in his country home, Aguleri, Anambra East Council Area.

Governor Obiano who acknowledged that Society for Family Health, the World Health Organisation and the UNICEF have worked closely with the State government over the years to bring improved healthcare delivery to Ndi Anambra, promised to sustain the partnership.

He said aside meeting its counterpart responsibilities for the interventions, his government has also enacted the Primary Healthcare Law with a Board constituted to ensure its implementation, noting that the Board’s terms of reference align with the key areas where the development partners focus on, including Child and Maternal health as well as providing quality health to the people, especially those in hard-to-reach and river-rine areas.

The Governor further said through the Primary Healthcare initiative, his government is living out its stance of institutionalizing operational systems that will provide the enabling structures for future administrations in the state to function effectively.

The Commissioner for Health, Dr Joe Akabuike, explained that the renewed negotiations with the Organization has become necessary in response to the withdrawal of donor partners from the state due to paucity of resources, adding that the parley is expected to help the State explore new partners towards improving the lives of Ndi Anambra.
The Leader of the Delegation and Managing Director of the Organization, Mr Bright Ekweremadu, said the advocacy visit is a key component of their strategic objective to muster the support of political leaders towards a new dimension in the fight against malaria and HIV, especially as the subsisting programmes are gradually winding up.

In an exposition, the Territorial Manager for the Organization, Mr Sebastine Ikejide, enumerated some of their programmes in the state to include Women’s Help Project, Global Fund/ HIV, Global Fund/Malaria, among others, all of which he said, are in keeping with their life-long commitment to providing quality Health service to the poor and vulnerable in the State.

The Society for Family Health is the principal recipient of the global fund for malaria and HIV and has been in the State since 1993, implementing various programmes across the two key areas, most of which centered majorly on distribution of drugs and other prevention materials, training of personnel and advocacy.