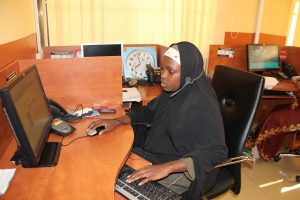 Maternal and Neonatal mortality is one of Nigeria’s biggest health problems. The North East of Nigeria bears a large percentage of this predicament due to household and community issues such as low uptake and poor quality of antenatal care; family beliefs and behaviours which are not conducive to healthy survival of the neonate; minimal skilled attendance at birth; and other reasons that may be tied to the cultural and economic position of people within these communities. In Gombe State, only 27% of women deliver at health facilities (NDHS, 2013). Most women give birth at home, having received little or no antenatal care from a trained health provider to enhance uptake of life saving intervention for the mother and new-born. Access to accurate information on health has also been a major challenge especially in rural communities where health indices are lowest.

To combat these issues, the Bill & Melinda Gates Foundation initiated and supported the implementation of the Maternal and Neonatal Health Care Learning Project in Gombe between 2009 and 2011 to demonstrate effective, scalable approaches to improving critical maternal and neonatal health (MNH) practices in the home. One of the objectives of the learning phase was setting up of a functional MNH call centre to provide access to information on MNH and enhance referral to health facilities.

Working with the State government, a call centre was built within the Gombe State Specialist Hospital premises in order to enhance State ownership and sustainability of the innovation. Qualified personnel were recruited and trained to service the centre.

The MNHC Centre which was commissioned on the 10th of November 2010 engages twelve hotlines lines from four mobile telecommunications network providers -GLO, MTN, AIRTEL & ETISALAT to provide toll free information service. The call centre is equipped with 7 work stations and manned by experienced nurses and midwives who work flexible shifts to provide 24 hours’ information and referral services to the populace. Pregnant women and their families call the centre to seek information on issues affecting pregnancy, delivery, new-born care, family planning and malaria. It is also accessed by frontline workers (TBAs FOMWAN and ETS) who call to resolve challenges encountered while delivering services in the communities. The Call Centre links women with Emergency Transport Scheme volunteer drivers when emergency transportation to a health facility is required.

The call centre in recent times has been upgraded technically and in the aspect of infrastructure to increase coverage. and thus having the potential of targeting a wider range of health related issues. As most nouvelle projects are without challenges; there are many unleashed potentials of the Call Centre which the Gombe State Government has indicated interest in maximizing. The government can take full advantage of the Call Centre operation in gathering information on any outbreak of epidemic in the state. They can also use the centre to enrich the HIV/AIDs programme; where people can call and get adequate information on HIV/AIDS. In addition, the government can use the centre as a source of health information on health for strategic planning purposes when providing palliative care for communities in the State.

Following series of consultative meeting as   Donor’s funding of the centre comes to an end, the Gombe State Government has decided to take the bull by the horn by taking full ownership of the centre. The implication of this transition is that the State government, henceforth, will take over the staffing, operation and maintenance of the Call Centre. In alignment with the above intention, Society for Family Health and State Ministry of Health held a sustainability meeting in October, 2015 which birthed a handover road map of the Call Centre.  Decisions were reached to engage more stakeholders and train government staff on call centre skills and operations, especially persons who are computer literate/ persons who possess literacy in computer.  In response to the above laudable plan and with support from Bill & Melinda Gates Foundation, SFH supported the State Government in providing capacity building, mentoring and infrastructural upgrade to ensure successful hand over.  Fourteen Government staff including Nurses/Midwives, M&E specialists and ICT officers were trained on management and operation of call centres/ the call centre in December 2015. Some of the trained staff were subsequently deployed to anchor the Call Centre operation which began for the year in January 2016; under the supervision and mentorship of SFH.  In addition to the renovation of the facility/ call centre, a general overhauling of equipment was carried out by SFH towards a sustainable hand over.

After a thorough face-lift, The MNHC Call Centre was finally handed over to Gombe State Government on Tuesday, 19th of July 2016.  The event had in attendance the Honourable Commissioner for Health, Permanent Secretary of Ministry of Health, Directors of State Hospital Management Board, Implementing Partners and key community representatives. Receiving the Call Centre, the Commissioner for health expressed his heartfelt gratitude to BMGF and SFH for the laudable innovation/investment and the opportunity of ownership presented the government.

He pledged to keep track of the call centre operations. He also identified with the potentials of the centre and canvassed for support from other implementing partners for support especially in the face of the current government dwindling resources.