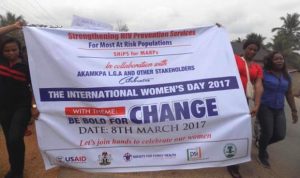 Celebration of the International Women’s Day, 2017 in Cross River State by the SHiPS for MARPs Project Team of the Society for Family Health

As the World celebrates the International Women’s Day (IWD), the Society for Family Health, SHiPS for MARPs Project Team in Cross Rivers State also commemorated the annual worldwide celebration by creating awareness on the various Problems and challenges women face in their local community. The IWD is a yearly event that brings women to the forefront through bilateral discussions that benefit women, highlighting issues such as poor political involvement, low economic empowerment, and fundamental rights abused/ violated amongst others.

The awareness was held in collaboration with Akamkpa Local Government Area and other stakeholders. The event comprised of a rally and a public awareness seminar which included an interactive session. The occasion kicked off at about 8:30 am with the arrival of participants. Brothel and Non-Brothel base key populations mobilized for the event, Civil Society Organizations (CSO) staff from Paradise Alliance Health Care Community Development Initiative (PAHCCDI) and SFH state staff comprising of the SHiPS for MARPs team and others. HIV Testing Services (HTS) tents were mounted at different points within the council area, STI service point as well as a stand for the display of all SFH sales products and services.

The rally took place on the streets of Akamkpa main town around the council area, with the women chanting, carrying placards and distributing Information Education & Communication (IEC) materials. The aim of the rally was to give women a voice to speak out confidently on the things affecting their lives and the importance of their role in nation building.

The second phase of the event took place in the Local Government Council’s Hall and was declared open by the Head of Akamkpa Local Government Administration, Mr. Effiom Bassey. Mr. Bassey in his opening remark, emphasized that the role of a woman should not only end in the kitchen. He encouraged them to break forth; get educated and earn roles in government. He charged the women to compete with men, highlighting that women are as good as the men. To round off his speech, Mr. Effiom Bassey stated that over 40% of the management team in their local government council is made up of women.

The Territorial Manager, Dr. Ngozi Noel-Ogamba delivered the theme talk: “Be bold for change.” She charged the women to have goals, build self-esteem, know their HIV status and encourage their partners to do same. She advised them to be bold and have confidence in themselves, look beyond what they are doing today and have a bigger picture about life. She also explained that the Society for Family Health would be working closely with them to provide services, information and other empowerments possible.

The State Team Lead of the SHiPS for MARPs Project thereafter seized the opportunity to introduce SHiPS for MARPs activities in the local government area to ensure that all key populations have condoms and lubrica, know how to use condom, get screened for STIs and get tested to know their HIV status. He encouraged all to access the services.

There were goodwill messages from the Local Action Committee on AIDS Coordinator, the DG, Cross River State Agency for the Control of AIDS, the Akamkpa Women Development Officer, the Wife of the HOLGA and The SACA DG represented by Barr. (Mrs.) Ada, who emphasized the need for women to know their rights and she encouraged them to be willing to report all cases of rape, harassment, battery, unlawful arrest and stigma.

At the close of the event, over 38 women were tested for HIV/AIDS and over 15 women were screened for STIs. Over 50 Female Sex Workers FSWs attended this occasion. At the end of the occasion, it was obvious that the target population for the activity were happy, emboldened and ready to face life with a different perception.