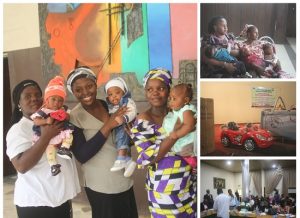 World Breastfeeding Week is celebrated by over 170 countries around the world to commemorate the Innocent Declaration signed in August 1990 by government policy makers, WHO, UNICEF and other organizations around the world, to protect, promote and support breastfeeding. It is usually celebrated from 1st – 7th August, annually.

The Society for family health aiming to promote breastfeeding in Nigeria, leveraged on the World Breastfeeding Week to saturate the Nigerian populace with the message of Exclusive Breastfeeding (EBF). Through its sub-team, the Expanded Social Marketing Project in Nigeria, SFH joined other partners and the media for a press conference on Wednesday, August 3, to discuss initiatives and future plans.

This year’s event was marked with several activities across the Country. SFH, in association with FCT Primary Healthcare Board and other partners commemorated the week with a Grand Baby Show held on the 4th of August.

The Grand Baby Show which left the attendees applauding the initiative and efforts of SFH, was a rewarding platform fashioned to encourage mothers who are already practicing Exclusive Breastfeeding and, at the same time, a source of motivation to those who are yet to embrace this safe practice. The event was also used to address certain challenges many face with strict adherence to EBF.

It featured a gift presentation segment where mothers who have done very well in breastfeeding were judged using several parameters, which included screening of babies. Some winners emerged. These winners were presented with various gifts such as washing machine for the first prize winner, a huge baby toy car for the second prize winner and a playpen for the third prize winner.

The social media being a formidable tool for dissemination of information and creation of awareness was also used as a tool for the campaign. Discussion on EBF is to follow via twitter and Facebook with the handle (EBFng) for both platforms.

Also, radio jingles were aired and are still being disseminated in over 40 radio stations. Radio stations featured live talk-show. In Abuja, Wazobia FM and Nigeria Info radio stations featured EBF stories and live interviews. The talk shows were interspersed with calls from listeners, who despite throwing in barrage of questions, were duly attended to by nutrition experts from Federal Ministry of Health and other health partners.

With so much activities done to commemorate the week, the SFH team look forward to recording ground breaking behaviour change from caregivers and influencers as a result of this year’s campaign. Although, the week has elapsed, the campaign just got started.